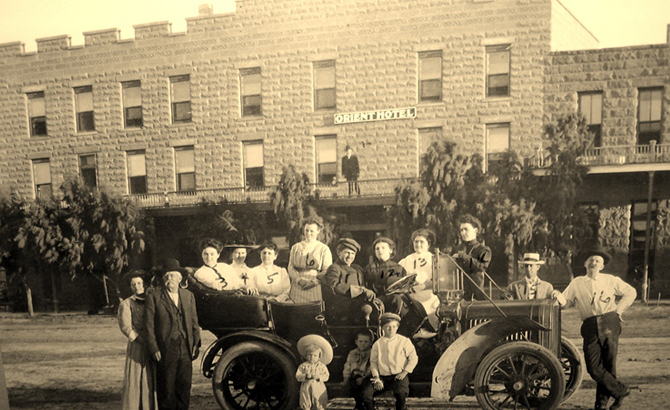 In its prime the Orient Hotel was labeled the “best hotel between Fort Worth and El Paso.” Constructed in 1896, the original structure was the No. 11 Saloon with guest rooms on the second floor. In 1904 retired Texas Ranger R.S. Johnson added the hotel built from Pecos Valley red sandstone from the quarry just eight miles east of town.

Early on the Orient was used as a headquarters for land promoters, salesmen, and families of settlers. The building’s proximity to the train station made it easy to enjoy all that Pecos had to offer. In 1962 both the hotel and saloon were restored, opening as the West of the Pecos Museum the following year.

Intact today you will find the original pressed tin ceiling and hand-carved newel posts along with most of the original furnishings from the saloon, which was the scene of a double homicide in the Old West days. Bronze markers and a bullet hole show where the fracas took place. Over 50 rooms of history and memorabilia are housed in the museum.