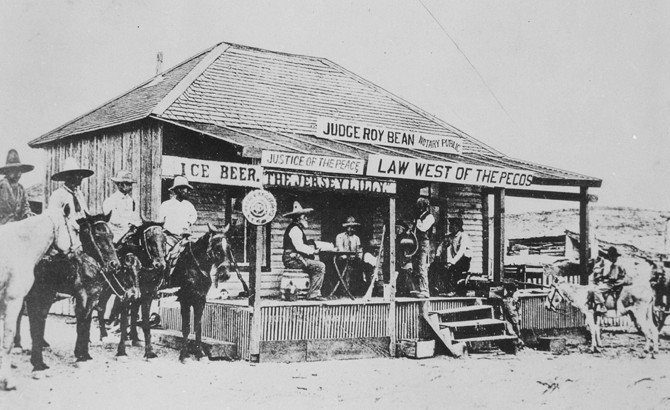 The tales of Judge Roy Bean are legendary; he is known as the “Law of the Pecos.” He established his courthouse about 1882 in Langtry, Texas, just south of Pecos, but since he was a circuit judge he held court periodically in Pecos where he would back up his wagon and team of mules and set up court at the present day location of the Sheriff’s Department.

In 1935 Pecos prepared to celebrate the Texas Centennial by creating a replica of Bean’s courthouse. Local officials traveled to Langtry to take exact measurements of the courthouse-saloon, and lumber from an abandoned house on the Colson ranch north of Toyah was used.

Originally the replica was built and placed at the corner of 3rd and Cypress Street, but in 1959 the replica moved to 5th and Oak to make room for the new bank. Again in 1975 it moved to its present location in Centennial Park for the national bicentennial celebration of America’s 200th birthday.