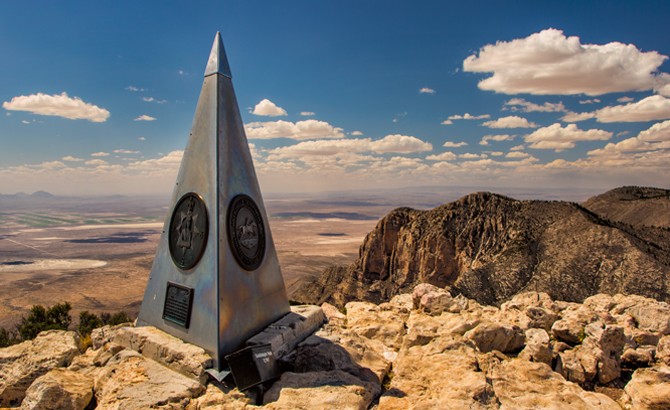 One of the world’s prime examples of a fossil reef from the Permian Era, this park is known for extensive hiking/backpacking trails. It’s one of the nation’s most pristine wilderness regions and harbors the highest point in Texas: Guadalupe Peak.

You might be surprised to know the Guadalupe Mountains were once a reef growing beneath the waters of an ancient inland sea. (That same vanished sea created the honeycomb of the Carlsbad Caverns.) This West Texas park is a true gem that few people outside the state have discovered.

From a distance the mountains resemble a massive wall, but upon entering the park surprises crop up: contoured canyons, shady glades surrounded by desert scrub, and a plenitude of wildlife. You'll find many great visual treasures along the 80 miles of trails; even the Apache and Europeans spun legends of fabulous caches of gold in the mountains.

If you're a motivated hiker, take on Guadalupe Peak, the highest point in Texas at 8,749 feet. A visit to the peak in spring showcases fresh foliage and abundant blossoms due to rains, and a journey into the park during the fall leaves you breathless with splashes of red, yellow, and burgundy in the changing of the leaves.