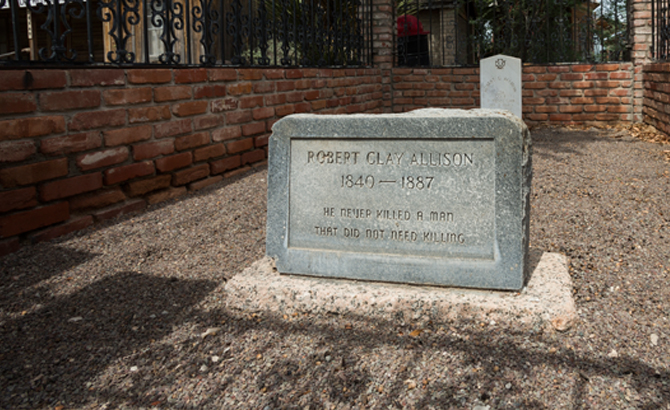 Allison was commonly thought of as an eccentric gunfighter and rancher. Born around 1840 in Waynesboro, Tennessee, Allison displayed odd tendencies from an early age, resulting possibly from an early childhood head injury. He was discharged from the Confederate Army on rare medical discharge for a condition that doctors called “partly epileptic and partly maniacal.”

Out of the army he ventured into being a cowhand for the famous Texas ranchers Oliver Loving and Charles Goodnight. Eventually he would start his own ranch near Cimarron, New Mexico. He mostly got along with local residents, but his tendencies of violent rages became apparent. Many stories have been recounted about his extreme behavior—like riding nude through the streets of Mobeeie, Texas, or decapitating an accused murder.

In 1874, Allison’s dangerous reputation grew when he beat a famed gunfighter to the draw. Allison was married and moved his ranch to the Texas Panhandle. He and his wife eventually had two daughters, and perhaps family life mellowed him. His behavior, however, remained extremely eccentric, and occasionally he lapsed into violent rages.

In 1887 Allison died while driving a freight wagon to his ranch north of Pecos when a sudden jolt threw him from the wagon and a wheel rolled over his head, crushing his skull and neck. In 1975, Allison’s remains were moved to a grave in downtown Pecos, where a granite headstone made the questionable assertion that he was a “Gentleman and Gunfighter” who “never killed a man that did not need killing.”