Howdy y’all, and welcome to the Pecos Boot Trail. Start at the Pecos Chamber and pick up your very own Pecos Boot Trail Guide. Swing into the organization or business that sponsors each boot to collect a stamp. Then bring your completed book to the Pecos Chamber to lasso your very own Pecos Proud prize! Get ready, because you’re fixin’ to kick up some dust and get a taste of life in the Old West. So saddle up, and enjoy the ride! 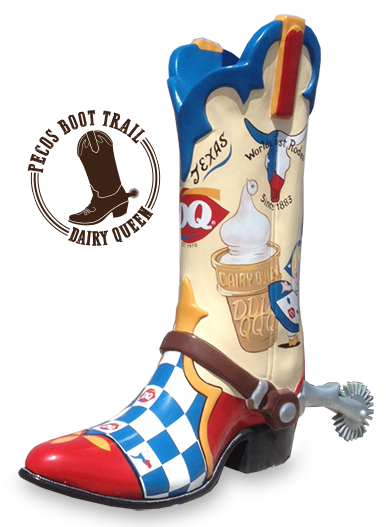 This vintage-inspired boot depicts Dairy Queen imagery that Texans know and love, like DQ’s checkered blue and white pattern and the soft-serve cone that’s been savored by generations in these here parts. You could say our affinity for DQ is “a Texas thing.”

We traveled back in time, sifting through decades-old Dairy Queen advertisements and iconic illustrations for inspiration when we hit the drawing board to design this fun, hunger-bustin’ boot. 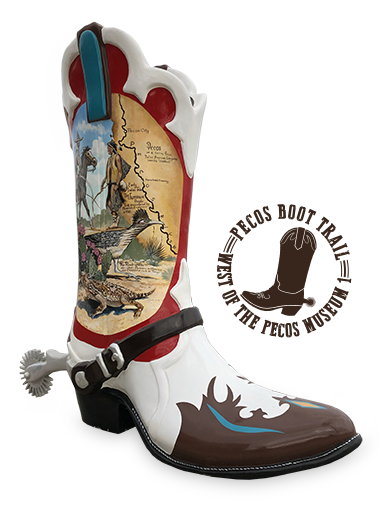 2. West of the Pecos
Museum Boot 1

At the West of the Pecos Museum, you get not one, but two intricate depictions of the history and lore of Pecos. Because of its unique location, the museum is one of the first attractions folks see coming into Texas, and one of the last they see on their way out.

We had a treasure trove of exhibits to draw guidance from when we set out to design the museum’s two boots. From oil rigs and cotton fields to our signature cantaloupe crops and desert wildlife, these boots showcase a little bit of everything. 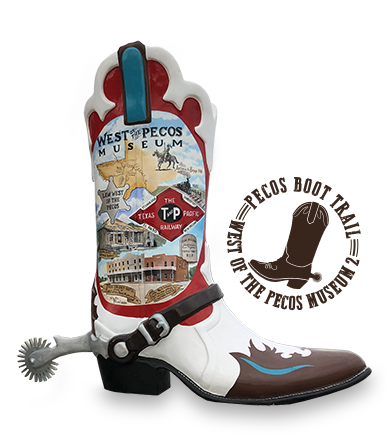 3. West of the Pecos
Museum Boot 2

West of the Pecos Museum is housed in an old saloon that was built in 1896 and in the Orient Hotel, added in 1904. The buildings alone provide plenty of scope for the imagination, but  visitors will also find recreations of historical scenes in the Old West.

The design for the second boot showcases old buildings, the tombstone of a famous Pecos gunfighter (and gentleman!), the T and P Railway, and more! 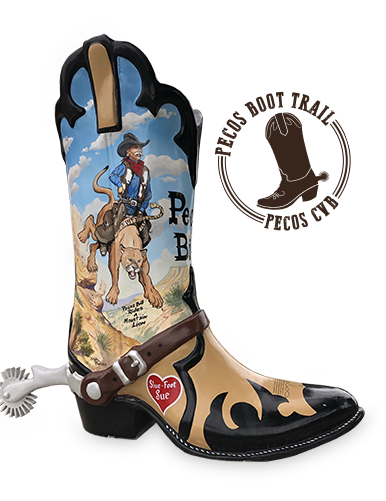 Who comes to mind first when you hear the name Pecos? Well…Pecos Bill, of course! The West Texas adventurer is portrayed in the midst of two of his most notable escapades across the canvas of this boot—riding both a mountain lion and a West Texas cyclone!

We loved the idea of using a West Texas icon for this boot, because it’s cowboys like Pecos Bill that make the tall tales of Old West life so much fun to hear, and folks come from near and far to retrace the adventures of times past. 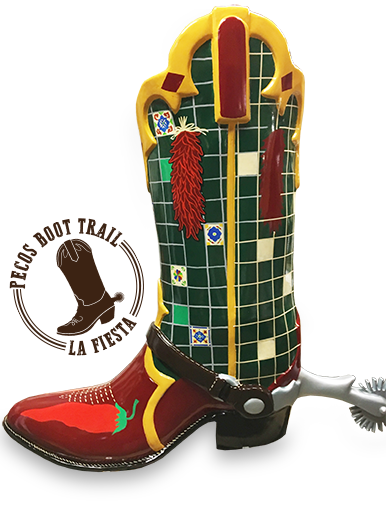 This boot showcases a Spanish tile pattern and one of Mexican food’s most beloved ingredient: chilis. Be sure to make time for a home-cooked breakfast, hot lunch, or dinner plate while you’re there. Or, wrap up something with a spicy kick inside a homemade tortilla and enjoy it on your way to the next boot. Yum!

This boot was fun to design. We drew inspiration from rich traditions and festive imagery of the Mexican culture that’s an important piece of Pecos history. 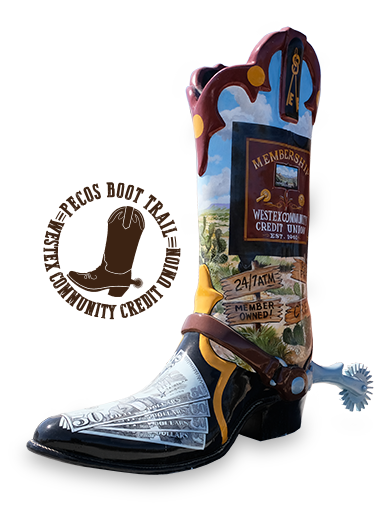 Step back in time as you take in this boot, with its vista of the landscape that surrounds our beautiful community. WesTex Community Credit Union has been a part of West Texas for almost 60 years, so they know Pecos through and through.

For this boot, we used old-time banking images like golden coins, large skeleton keys, and a rustic safe, as well as West Texas staples like pick signs, cacti, and wide-open skies. 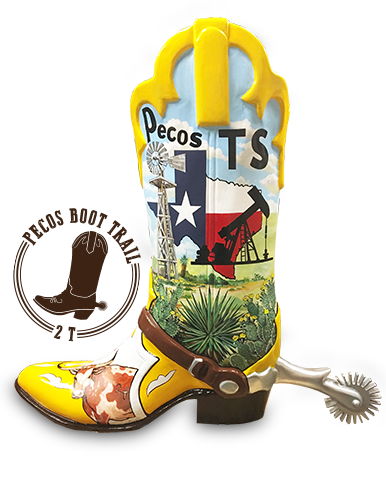 This boot gives a nod to the hardworking farmer and showcases symbols near and dear to the West Texan heart: windmills, pump jacks, yucca, cattle, and more. At sunup and sundown the Texas skies paint a vivid backdrop of pinks, oranges, and yellows, which we captured on this boot, along with daytime’s blue skies.

The inspiration behind the 2T boot was taken from the scenery folks take in as they travel across the plains and into the town of Pecos. 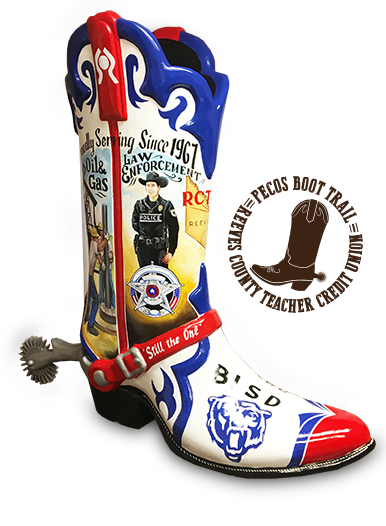 Pride in the town of Pecos covers this boot, pulls to tip. The dignity and honor of Pecos’s history, law enforcement, education system, oil and gas industry, and medical community are all depicted in wonderful intricate detail on this boot.

We designed this boot to represent various industries served by the credit union and show the unity between them, which is part of what makes Pecos such a unique community. 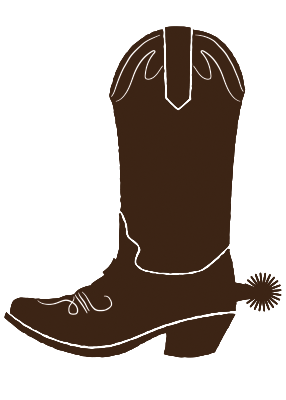 What does transportation have to do with Pecos? From wagons to railroads and old-timey cars to semi-trucks, the progression of transportation has brought countless new opportunities to Pecos over the years.

The concept for this boot is “old to new.” This boot’s canvass tells the history of transportation in Pecos and how it continues to contribute to the town’s growth and success.

This boot’s design includes the old Pecos Valley Bank building, circa 1903, its renovated state as the Z-TEK Construction building, and a set of blueprints to represent structures transitioning from old, unusable spaces to new, reinvented spaces that meet the needs of our growing Town of Pecos City.

11. West of the Pecos Rodeo Boot

There was so much material to work with for this boot, we could only include a portion of what makes West of the Pecos Rodeo our most popular event. The rodeo collage includes buckin’ broncos and bewildered steer, and references the Cloverleaf Classic, our beloved women’s barrel race, as well as Pecos’s very own spur-maker, Oscar Crockett, one of the big three spur makers in the world.